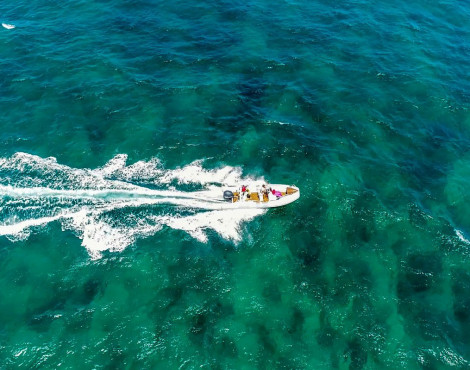 The beauty of the islands, beaches and the north-east coast of Madagascar is still undiscovered. There is no hotel in Diego Suarez that has a top boat offering this to Mantasaly clients. Many of the places you can reach by ocean are unknown even by locals. If you ever imagined a white sandy beach, the turquoise water that only you and your friends can find here. A selfi in such a place will be lying to you that you were once in paradise. 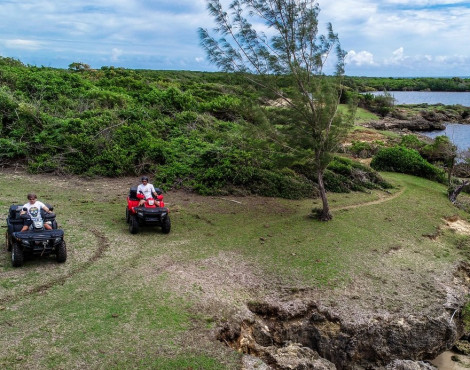 The northeast of Madagascar is an area with undeveloped tourism with spectacular locations and friendly locals without too strict rules. All this builds an ideal cumulation for ATV excursion. Expedition in a wonderful wildlife and local village give you an unforgettable experience. 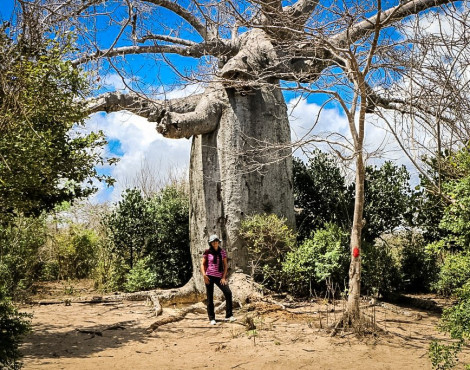 (Free for our guests)

Walking around Mantasaly an opportunity to move around in nature and discover new things you cannot meet , no more than 15 min you will meet a gray BAOBAB 500 years, 30 minutes a gigant red Baobab and 50 minutes you can visit the village of Ivovona and the archaic way in which the locals live.

This site is called French Mountain due to the occupation of this part years before, some fortifications and ruins can still be found on, one of tourist attractions over there. It is also a sacred place for catholic faithful, the top of the mountain offers a breathtaking panoramic view on the city of Diego Suarez and its famous bay. This site shelters endemic species (fauna & flora) and forest laying upon calcareous massif eroded into karst formation locally called the Antsingy. The forested area is between 100 and 450 m above the sea. An ideal touring for mountain hike amateurs, passing through dry vegetation to different types of baobab, discover the “Andasonia Suarezensis” the red baobab growing only in the region of Diego Suarez. Distance: 10 km (25 mn) Access: All the year Tour: 3h Number of pax: 1 – 8 persons Price: 40€ per car Possibility: Picnics (on demand) Expectations: entrance fees, guide. 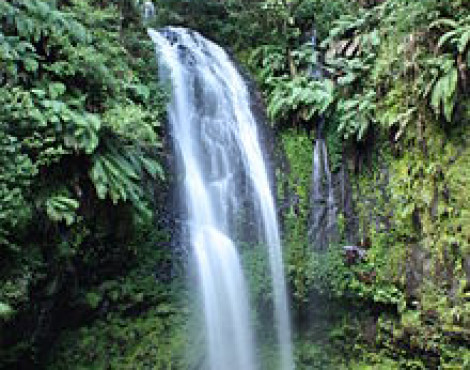 The highest peak in the region of Diego Suarez, passing though the village of “Joffre ville” named after a French Marshall during the colonial era, the Amber Mountain National park is covered by tropical wet forest with thousands of precious woods, botanical garden, rainforests and an important diversity of fauna, from lemurs, birds to reptiles. The trek is about 3 or 6 hours depending on your chosen circuit, cool temperature and pure air, you will enjoy this environmental beauty area. If you are lucky on this tour, you might witness traditional rites done locals in this sacred place. Distance: 57 km (1h30 mn) Access: All the year Tour: 3-6 h Price: 90€ per car Number of pax: 1 – 4 persons Possibility: Picnics, camping Expectations: entrance fees, guide 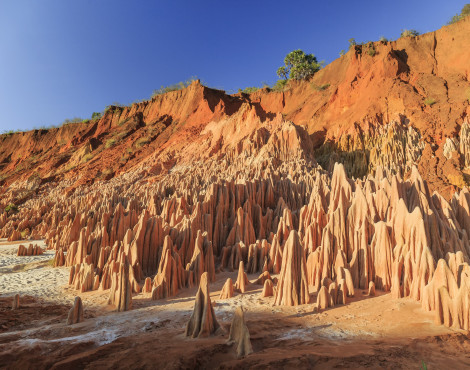 A natural reserve composed of sandstone, limestone and marl, just at the foot of eroded canyons; in the only sedimentary basin of Madagascar and heterogeneous vegetation. Through the mountains, to the south East of Diego Suarez. The red Tsingy offers you other secrets of nature. Distance: 80 km (2h30 mn) Access: All the year (expect hard weather conditions) Tour: 1h Price: 100€ per car Number of pax: 1 – 4 persons Possibility: Picnics Expectations: entrance fees, guide. 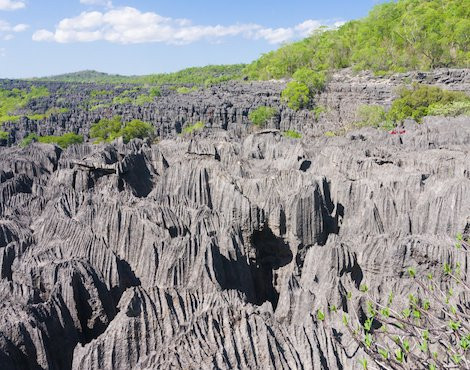 The Ankarana reserve is geographically is located between mountains and forests spread over the several hectares reputed on the richness of its fauna where several endemic species live in such as reptiles, amphibians, lemurs, birds and the famous “fosa”, etc… The scenery is dominated a dry forest and a formation of eroded calcareous rock from Jurassic era called the “Tsingy”. Some points of interest like the mightiest baobab (+800 years), the loss of rivers, the cave of bats where living in the smallest to the biggest species (14 types). Distance: 130 km (3h30 mn) Access: All the year (expect hard weather conditions) Tour: 3 – 6 h Price: 110€ per car Number of pax: 1 – 4 persons Possibility: Picnics, accommodation Expectations: entrance fees, guide 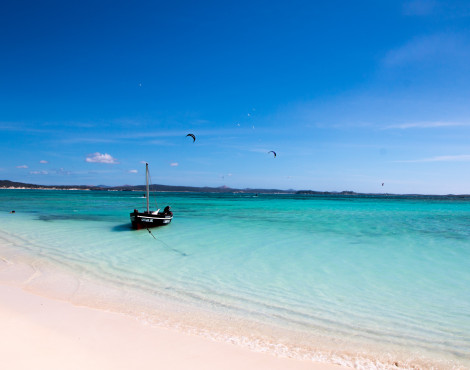 Located in the northeast part of Madagascar Island, this destination is one of most amazing in the world. The water color, shallow sandy bottom, waves and various sand islands will be part of your wonderful day. You can get to the Emerald Sea by boat from the little village of Ramena, just a few kilometers to the Mantasaly. Distance To Ramena : 12 km or 20mn (Car driving) From Ramena to emerald sea: 50 mn (traditional boat sailing) Access: All the year (expect hard weather conditions) Tour: 6 to 7h Price: 35€/non kiter – 45€/kiter Possibility: Picnics (included), kitesurf 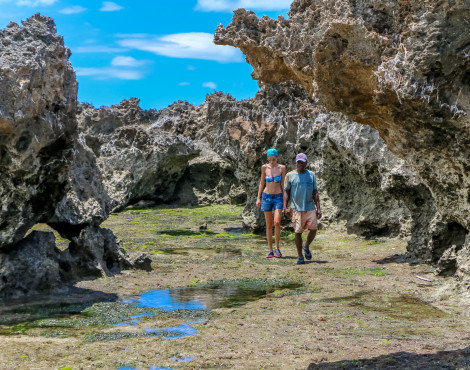 Located at the junction of Andovokonko Bay and Sakalava Bay, the marine caves offer a spectacle of beautiful and most astonishing natural landscapes. To get there, we offer a walk along the beach past a forest of mangroves and cliffs. After visiting the caves, you can extend your walking direction to see the great Baobab of Sakalava (+400 years), a tree that is famous in Madagascar, spread almost throughout the island. Distance: 5km Trekking and visit: 2h30 Accessibility: all year round (low tide) Price: 5€/group 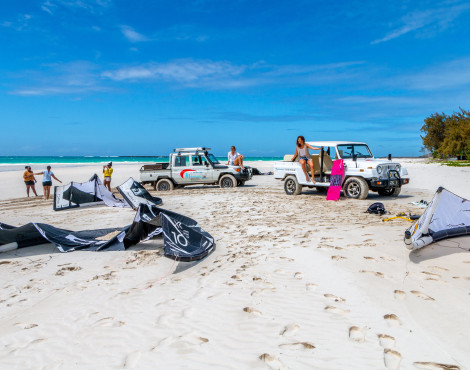 An unusual destination on the east coast of Diego Suarez. From the Hotel, a 1h45mn safari awaits for you, passing through the fishing village of Ivovona AND Ambodivahibe through dry vegetation and red rocks to reach the marvelous white sand of the pirates bay. Beautiful landscapes are to discover, the wild state of this place is its main asset of attraction. We organize a picnic day with barbecue option according to your requests. Distance: 1:45 safari (about 40 km) Tour: full day Accessibility: all year round (except bad weather conditions) Price: 100€ per car Number of pax: 1 – 4 persons Possibility: Picnics, kitesurf

Located at the bottom of a volcano crater, this lake is a source of stories and myths. The crocodiles having their home in the lake are considered sacred, because of a legend told by the elders. The lake is indeed the subject of several speculations and it has become a place of passage for the most curious. It is also a place dedicated to rituals for requests for blessings or to invoke ancestors. Distance: 100 Km Access: All the year (except hard weather conditions) Reserve visit: 45 mn Price: 100€ per car Number of pax: 1 – 4 persons Possibility: Picnics, accommodation Expectations: entrance fees, guide 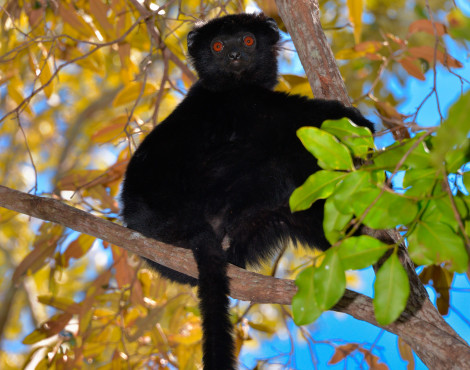 The Andrafiamena-Andavakoera Protected Area is located in the national road N°6. It covers an area of about 75’000 ha including 30’000 ha covered with natural forests. It is a rich and varied environment in biodiversity. It has multiple interests: sandstone mountain ranges covered with rainforests and a few limestone blocks covered with dry forests, as well as transitional forest habitat for several endemic animal and plant species. This area is the last refuge of the Perrier Sifaka (black lemur), endangered species which is also the emblematic lemur of the area. (Installation for available accommodation) Different tourist circuits of various attractions and characteristics are operational in Andrafiamena Park. Distance: 97 km Accessibility: All year round (unless weather conditions are unfavorable) Perrier’s Black species circuit: 2.5 hours Circuit Natural swimming pool: 4h Circuit point of view: 5h30 Big hiking circuit: 7h, especially for big walkers Price: 110€ per car (1 day) and second day added for 90€ (2days for 200€) Number of pax: 1 – 4 persons Possibility: Picnics, accommodation Expectations: entrance fees, guide *The price includes: car, fuel, driver and parking

The Trekking at Pigeon Bay is also the way to discover the beauty of the Bay Coast, you will pass through inaccessible trails by car. Admire the surrounding vegetation including the mighty Baobab of Sakalava Bay (+ 400 years) and meet the locals while experiencing the pleasures of walking will certainly amaze you. A quiet corner awaits you at Pigeon Bay, an idyllic beach, clear water for swimming and a refreshing sea breeze. We organize this trekking with grill option on site according to your requests. Price: 5€/group Possibility: Picnics, kitesurf 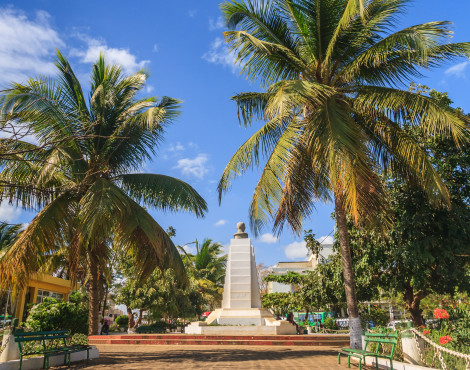 Diego Suarez, capital of the northern region of Madagascar known on the local name “Antsiranana” whose meaning is port city, is home to the 2nd largest bay in the world (156km) after that of Rio de Janeiro of Brazil. It is the most cosmopolitan city of the Big Island and one of the welcoming city in the world, cohabiting the locals; Antakarana and Sakalava also several ethnic groups existing in Madagascar, without forgetting the naturalized Vahiny (naturalized foreigners or residents); Comorians, Pakistanis, Indians, Chinese, Yemenis, Somalis and Europeans: French, Swiss and Italian. Diego Suarez is derived from the names of two Portuguese navigators who had discovered the Bay in the sixteenth century (Diego Diaz and Fernan Suarez) then passed to the imaginary Republic of Libertalia from the attendance of the seventeenth century pirate ships in the Indian Ocean and the Mozambique channel. The City is full of stories and cultures, a visit will allow you to know a little more and to discover the historical and cultural vestiges of the past. Distance: 20km Tour: half day/full day Price: 90€/120€ Possibility: shopping, snacking or lunch